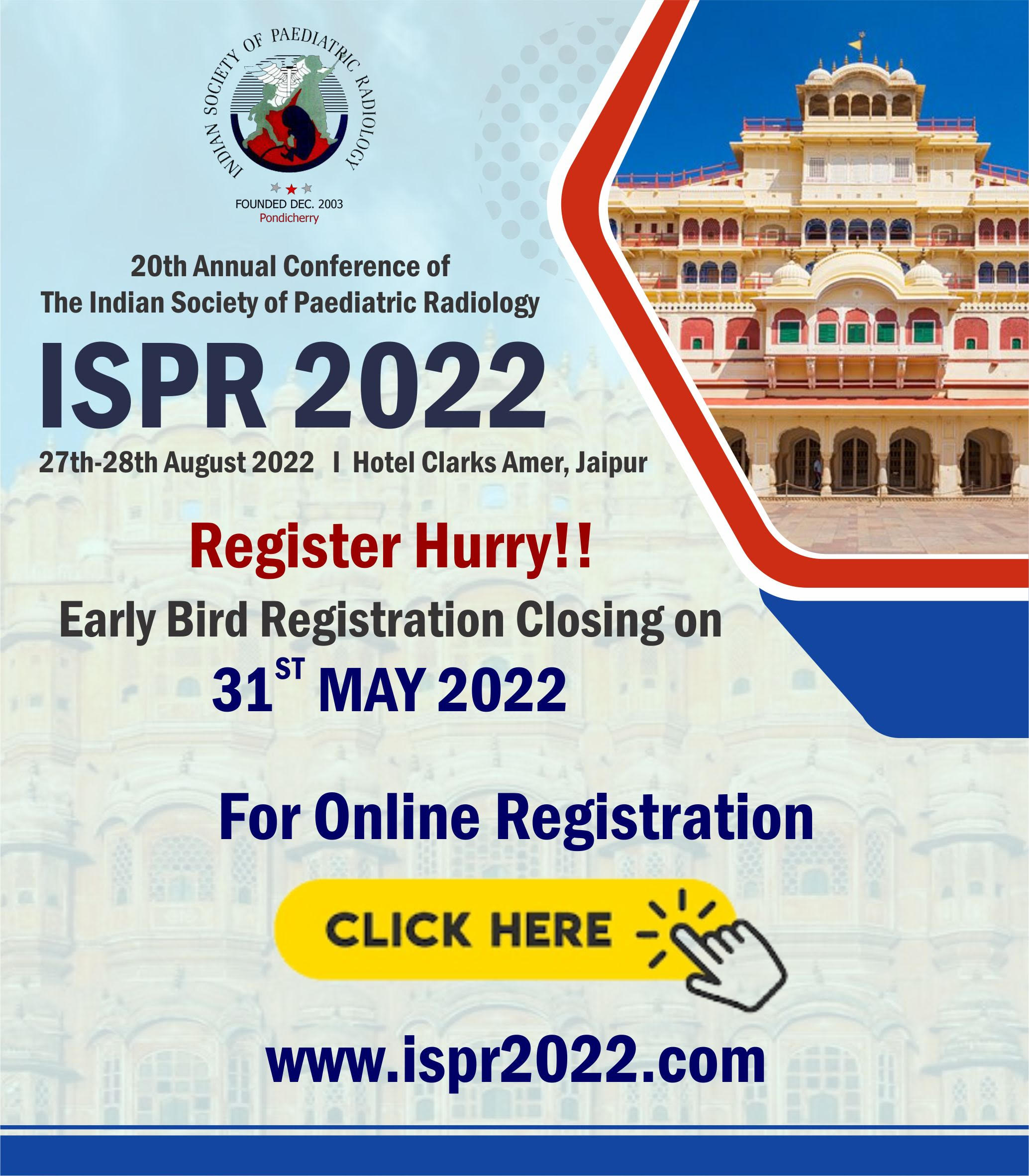 The Society was inaugurated by Prof T D Durairajan, former Director of Medical Services, Tamilnadu State, former Director of the Institute of Child Health, Chennai, a great academician and a renowned Paediatric Surgeon. The function was presided by Prof V P Narayanan, Senior radiologist and former VC of the Madras Medical College deemed University on 12 December 2003. This inauguration performed during the First National Conference of the ISPR was held in Pondicherry along with a one day academic programme.

The birth of Indian Society of Paediatric Radiology (ISPR) was actually on the eve of the 56th Annual State Conference of the Indian Radiological & Imaging Association, Tamilnadu & Pondicherry Chapter in the premises of Pondicherry Institute of Medical Sciences, Pondicherry. The Society is grateful to the TN & PY IRIA, President, Prof. Swaminathan, President Elect, Prof. N Kulasekaran and Prof. J R Daniel, Chairman of the 56th Annual State Conference of the IR & IA, TN & Pondicherry Chapter who consented to host the Inaugural Function and the First Annual Meeting of the ISPR. Best wishes were received from Prof. Dorothy Bulas, USA & reigning President of the Society of Paediatric Radiology (SPR) Prof Helen Carty, world renowned Paediatric Radiologist from UK and the President of the European Congress of Radiology, 2003.

The Logo of the ISPR was designed by Dr S Vetriraj. It represents the stages of man from fetus to adolescent and has the Caduceus medical emblem in the background

The following were the Office Bearers of the Society at its inauguration and the same team continued for five years until 2008:

The academic programme of the first Conference was very successfully conducted at the Pondicherry Institute of Medical Sciences and was deeply appreciated by one and all. The Organising Chairman, Dr J R Daniel, made a gigantic selfless effort to create the society and conduct the conference. The first Prof. M V K Shetty Endowment Oration was given by Dr Arun Gupta on "Periventricular Leukomalacia" and the first Prof Arcot Gajaraj Endowment Oration was rendered by Prof Mukund Joshi on "Paediatric Radiology-Past, Present & Future".

The II Annual Conference of the ISPR was held at Mumbai on 11 & 12th December 2004, under the chairmanship of Prof Mukund Joshi. It was an elaborate 2 day scientific meeting which was well attended by the members. The second Prof M V K Shetty Endowment Oration was given by Dr Veena Chowdhury and Dr Srinivas Desai gave the second Prof Arcot Gajaraj Endowment oration. It was during this time that it was decided to hold regular Annual conferences to popularize and create awareness of the Society in all corners of the nation. Preparations were made to register the Society and to form a Constitution.

This task was ably performed by Secretary General Prof J R Daniel who registered the society in 2006, at the office of the Registrar of Societies in Pondicherry.

As for the Constitution, the first document was framed prior to the registration of the society. Further amendments have been made over the following years and it has got a final form in 2009-2010.

The III Annual Conference of the ISPR was held in New Delhi, at the All India Institute of Medical Sciences on 1 & 2nd October 2005. This was possible with the patronage of Dr Arun Kumar Gupta and the Organizing Chairman, Dr Raju Sharma.

On March 10, 2005, Prof Arcot Gajaraj, the Founder Patron Coordinator of the ISPR passed away after a brief illness. An era of excellent leadership & guidance from a great teacher came to an end.

The First mid term CME of the ISPR was held very successfully in Lucknow, on 22 July 2006 with the dynamism of Prof Neera Kohli, Department of Radiodiagnosis, King George's Medical College, Lucknow.

The IV Annual Conference of ISPR was held on 23 & 24 September 2006, at the Hotel Golden Park, Kolkata under the chairmanship of Dr S K Sharma. Several new members joined the Society from in and around Kolkata.

The V National Conference was held on 22 & 23 September, 2007, in Hyderabad at the KREST auditorium under the patronage of Prof Kakarla Subba Rao and the chairmanship of Prof. Rama Subbaraidu.

The year 2008 was regretfully marked by the demises of the other Founder Patron Coordinator of the ISPR: Prof M V K Shetty on 11 March 2008, Founder Secretary General Prof J R Daniel on 28 Jan 2008, and other two Founder Members: Prof M Panchatcharam & Dr Ravi.

The VI National Conference of ISPR was held on 20 & 21 September, 2008 in Chettinad Health City, Chennai under the chairmanship of Prof M Prabhakaran. With the elections held in the VI Annual General Body Meeting the following new Office Bearers took charge of the Executive Committee of the ISPR:

During the first half of 2009, a one day National Second mid term CME was held on 31st May 2009 at Shimla, at the Himachal Institute of Public Administration, Fairlawns, Shimla. The conference was organized by Prof. Dalip Dhiman, HOD and Prof. J.R.Azad of Department of Radiodiagnosis, IGMC, Shimla. The Himachal Pradesh State Branch of the IRIA played a supportive role and there was a good participation from the neighboring states of Punjab and Haryana.

This year marked the passing on of a senior and much respected Professor of Radiology, Dr Elizabeth John (10 June 2009) at Chennai.

The VII National Conference of ISPR was conducted by Prof. Shabnam Grover at the Hotel Le Meridien, New Delhi on 12 & 13th September 2009.

After the Annual Conference held at New Delhi the need for holding a one day Third Mid Term CME was expressed by all members and thereby it was held at Kolkata on 25 April 2010 at the Hotel Golden Park, Kolkata. This was possible due to the enthusiastic help from Dr Bijon Kundu and Dr Anup Sadhu with Dr S K Sharma as the Organizing Chairman and Dr Tapan Dhibar as the Organizing Secretary. The West Bengal State Chapter of the Indian Radiological & Imaging Association (IRIA) played a supportive role for this CME of the ISPR.

The VIII National Conference of ISPR was conducted in Pune on 4 & 5th September 2010, at the Bharathi Vidyapeeth University Main Auditorium, Pune by the Organizing Chairman, Dr Dilip Lakhkar, Organizing Secretary, Dr Arundhati Pawar and their enthusiastic team of radiology staff and post graduate students.The conference drew a wide support from the staff and management of the Bharathi Vidyapeeth Medical College.

Elections for the New Office Bearers for 2010-2012 was held at VIII Annual General Body meeting in Pune and the current Office Bearers of the ISPR are as follows:


The IX National Conference of ISPR was held in Jaipur on 8th & 9th October, 2011at the JMA Hall, SMS Hospital, Jaipur with the help of Organizing Secretary Dr Pradeep Parakh and his team: notably Dr Mahaveer Goyal, Dr T C Jain and other senior radiologists of Rajasthan.

The X Annual National Conference of the ISPR will be held in Chandigarh with the chairmanship of Prof. N Khandelwal, Organizing Secretary, Dr Akshay Saxena and Dr Kushaljit Singh Sodhi. The meeting is scheduled on 29 & 30th September, 2012 at the PGIMER, Chandigarh.

The 6th National Mid-Term CME of ISPR was successfully held on 25th May 2014 at Sandys Tower Hotel, Bhubenswar under the Org Sec Dr Shakti Satapathy.

12th National Conference of Indian Society of Paediatric Radiology was held in the prestigious institute of Christian Medical College, Vellore under the chairmanship of Dr. Shyamkumar N K & the Organising Secretary was Dr Sridhar Gibikote.

A new committee was elected for ISPR in that conference :-

The 7th National Mid-Term CME of ISPR was successfully held on 30th May 2015 at GOA under the Org. Sec. Dr Kapil Naik.

The 13th ISPR National Conference was organized under the Chairperson Prof. Neera Kohli and Organising Secretary was Dr Anit Parihar. The Conference was graced by the ISPR President Prof Dr Niranjan Khandelwal and General Secretary ISPR Dr Bijon Kundu & Chairperson Scientific Committee Dr. Pallavi Aga. It was one of the most successful ISPR Conference with a record savings for ISPR till now. ISPR 13th Annual Conference in 2015 is a proud moment for all of us.

Treasurer of ISPR 2015, Dr Manoj Kumar was thanked along with the Organising Chairperson Dr Neera Kohli for their outstanding contribution to ISPR.

The 14th Annual National Conference of Indian Society of Paediatric Radiology was held in the City of Joy, Kolkata on 10th & 11th September 2016 at the Park Hotel, Kolkata under the Chairmanship of Dr S K Sharma & Organizing secretary Dr Bijon Kundu as well as the ISPR President Prof. Dr N Khadelwal.

It was as well organized National Conference and there was the launching of the 2nd Edition of a comprehensive ISPR Members Directory. A new National ISPR body was elected in the this conference.

The 8th Mid-term National CME of ISPR was held at Bengaluru on 25th June, 2017. The theme of the CME was Paediatric Neuroradiology.

Under the able chairmanship of Dr. Harsha C Chadaga it was held at the Whitefield Columbia Asia Hospital Auditorium with active support from Dr. Nanda Kumar Jairam, Chairman & CEO, Columbia Asia Hospital. It was well attended with over 200 delegates as well as distinguished faculty of 10 members from around the country & Dr. Manohar Shroff as the International faculty through telepresence from Canada.

An ISPR EC meeting was held on 24th June 2017 at Hotel Holiday Inn,Bengaluru, the day before.

It was an excellent conference and organised in the most professional manner. There was a great National & International faculty and was attended by over 250 delegates from all over India. There was a record participation of Post Graduate residents in the oral paper & poster presentations in which awards were given to the winners.

There was a superb scientific programme and wonderful cultural evening for the conference, enjoyed by all. Dr. Priscilla Joshi & her dynamic team deserve a great praise for their superb efforts.

AOSPR 2018, the combined 18th Asian & Oceanic Society for Paediatric Radiology (AOSPR) Congress and the 16th Annual meeting of the Indian Society of Paediatric Radiology was organized by the department of Radiodiagnosis and Imaging, Post Graduate Institute of Medical Education and Research (PGIMER), Chandigarh from 14-16 September, 2018 at PGIMER, Chandigarh.

738 delegates from India and abroad attended this academic feast .

Talks were delivered in the scientific sessions on topics covering pediatric abdominal imaging, chest imaging, musculoskeletal, Neuroradiology as well as interventions. All scientific sessions were very informative and highly appreciated. There were discussions related to pediatric radiology fellowship opportunities in India and abroad.

Society for Pediatric Radiology,USA was represented by its President,Dr.Taylor Chung.

The esteemed orators for AOSPR 2018 were Dr. Raju Sharma, Professor, Department of Radiodiagnosis, AIIMS, New Delhi who delivered the Dr. MVK Shetty Oration on “The Enigma of Pediatric Liver Tumors: Can Multi-modality Imaging be the Guiding Light” and Dr. Manohar Shroff, Radiologist-in-Chief at Hospital for Sick Children, Toronto who delivered the Dr. Arcot Gajraj Oration on "MR imaging of the Newborn Brain".

The meeting also included ultrasound workshops on neonatal brain and hip imaging covering Technique as to 'How I do it', Normal Anatomy and Positive Case demonstrations. There were also oral paper and e-poster presentations during the conference in which the delegates presented their research work and interesting cases related to the pediatric radiology. Prizes were given to three best oral presentations and e posters in the various categories.

The Department of Radiodiagnosis, JIPMER and the Pondicherry subchapter of TN&PY IRIAorganized the 10th National Mid term CME of ISPR 2019 on 30th and 31st March,2019 at JIPMER, Puducherry.

It was a very successful event organized by Dr.A.Ramesh,Dr.S.Nadaradjan as Organizing Chairpersons and Dr.S.Deepakbarathi and Dr.B.Padhmini as Organizing Secretaries.

Live ultrasound workshop was held in the afternoon of 30-3-2019 by Dr.Muralinath on Neurosonogram,Dr.C.V.Kanimozhi on Pediatric HIP USG and Dr.ShyamkumarN.Keshavaon Basic interventional pediatric Procedures.

The conference included 12selected research paper presentations and 27selected E-posters by the Radiology postgraduates across the country.Scientific sessions on topics covering abdominal imaging,chest imaging,MSK and Neurology were given by eminent national faculties.

Prizes were given to three best oral presentations and e posters and for the winners of film reading sessions.On the whole,the conference was a wonderful scientific feast for the faculty and delegates.